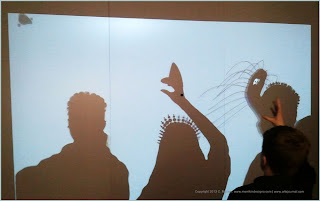 Recently, I had the pleasure of seeing the Shadow Monsters installation at the Experience Music Project in Seattle.  Shadow Monsters is the work of Philip Worthington, a British artist, who creates shadow puppets that are altered by visual recognition software.  When a person stands in front of a large light box, a shadow puppet is projected onto a large screen only the images change with movement. Eyes appear in closed counter spaces, moving noodle-like appendages grow from heads, and fangs appear in open angle areas (such as a hand with thumb and fingers at 45 degree angle).  Sounds were also written into the program, such as growling noises for creatures that have open jaws (as in the first photo). 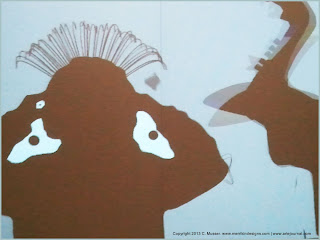 I have to say, I'm not sure which was more interesting to watch...the shadow puppets or the people as they watch their shadows being transformed on screen.