Alexander Calder. Most people think of his large public sculptures or mobiles but my favorites of his works are his wire figures and especially his circus. Calder's love of the circus stems from his days as a freelance artist and was sent to cover the Ringle Brothers and Barnum & Bailey Circus for two weeks.  As you can see from his figures and from a recording of the circus (as performed by Calder here) the circus made a profound impression.

Both of Calder's parents were artists themselves and encouraged their children to make art...up to the point of pursuing it as a profession, that is.  Concerned for their son's financial well being and security, they persuaded him to study engineering (Stevens Institute of Technology, Hoboken, NJ).  He received his degree four years later but decided to follow his love of art and attended the Art Student's League in New York.

What makes Calder interesting to study is that he is a clear example of the artistic potential of art and science.  You can see Calder's knowledge of engineering and love of mathematics is prevalent in most of his work (mechanical engineering especially seen in his Circus). 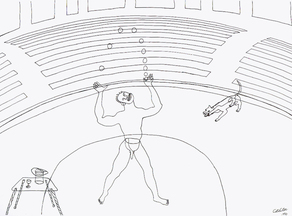 2. Wire sculpture. Could be done as individual project or as entire class (have them bring in a small object from home to contribute to piece).

3. Mobile (often good to pair with 2nd-3rd grade study units that deal with balance). Like with the wire sculpture above, could be done as collaborative effort or as individual. Recommend using 16 gauge wire or thicker. Mobile components could be: found objects (leave as is or spray paint uniform color), shrink plastic, sheet metal, paper.